This year’s iteration of HSBC’s annual ranking of the best places to live as an expat, published Wednesday, ranked 34 countries on a host of indicators, such as salaries earned, the expat’s quality of life and an expat family’s ability to raise kids abroad. The full rankings are in this chart below. Switzerland tops the list overall, with Egypt coming last.

The bank surveyed 9,288 expats in over 100 countries, but only presented findings for countries where there were more than 100 respondents.

Switzerland topped the rankings, as it had done the year before. Over a quarter of the expats HSBC polled earned more than $200,000 annually, but also maintained a better work-life balance than in their home countries. Switzerland’s beautiful scenery and lack of air pollution is a plus, with vast majorities of expat parents there saying their children lived safer and better lives than in their previous home, according to HSBC’s press release.

Perhaps more interesting is the growing draw of Asia for the expats surveyed, with its booming economies presenting lands of opportunity for expats from all over the world. “Asia emerges from this yearâ€™s survey as the best region for financial wellbeing, with nearly one fifth (19%) of expats earning over USD200,000 p.a. and 65% saying they have more disposable income since relocating,” says HSBC.

The rankings look rather different when you separate the findings by category. Asian countries may account for terrific remuneration, but not necessarily the greatest living experience. You’ll note China is not in the top 10 countries for raising children. Many expatriates, particularly those living in Beijing, the smog-clogged Chinese capital, fear the long-term effects of the country’s air pollution on their kids. 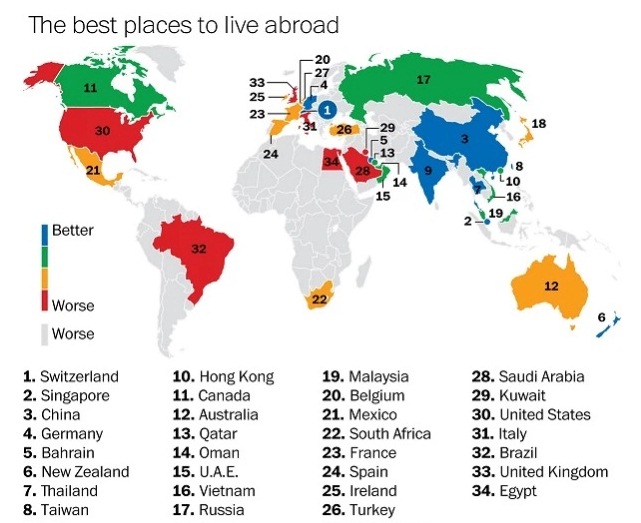