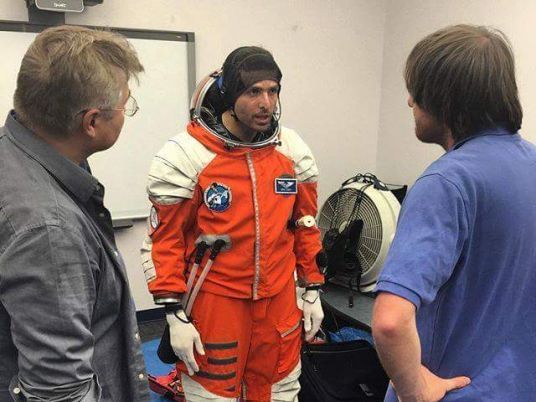 Egyptian explorer Omar Samra has bagged a number of high-profile feats of endurance in his short but glittering career, in each case claiming the title of “first Egyptian” to do so. His explorations have taken him to the peaks of the highest mountains on each continent — including Everest — as well as to the North and South Poles on skis.

As if this wasn’t enough, he has now turned his attention to what many consider the ultimate challenge — space travel.

For the past few years, Omar has been moving inexorably closer to his new goal of flying into space aboard a private US-owned spacecraft, making him the first Egyptian in space. In seeking to attain this goal, Omar hopes to encourage more young Egyptians to take part in space research and travel, thereby involving Egypt more fully in the global space exploration community.

In an exclusive interview with Egypt Independent, Samra describes how his career in space travel started, recounting some of the experiences he’s gathered along the way. He also says how he plans to break stereotypes about space travel in the Arab World, in the process boosting Egypt’s involvement in the field.

In 2005, when he was doing his master’s degree in the UK, Samra attended a talk given by Sir Richard Branson, founder of the Virgin Group. During his talk, Branson announced that one of his companies, Virgin Galactic, was starting preparations to conduct the world’s first commercial space flight. The aim was to afford regular people the opportunity to travel to space. In other words: space tourism.

Samra was enthralled by the idea, but after discovering that such flights could cost tens of thousands of dollars, he became discouraged.

He finished his master’s degree, and in the years that followed he made a stellar career as an explorer, becoming the first Egyptian to climb Mount Everest. He followed this by becoming the first Egyptian and one of 40 people in history to complete the Explorer’s Grand Slam, which entails climbing the highest mountain on each continent and skiing to both geographical poles.

But his dream of going into space did not leave him.

In 2013, XCOR, an American private spaceflight and rocket engine development company, in collaboration with Unilever, announced an international space travel competition. The 23 winners would be offered a ticket on the first commercial spaceflight, set to take-off in late 2014 or 2015.

XCOR had been developing a reusable spacecraft that would cut the cost of space travel. Previous spacecraft had always involved some destruction of the vehicle’s structure, meaning expensive parts had to be replaced on each flight. With the new design, nothing would be destroyed by the journey, meaning a massive cut in costs.

The Lynx II was developed, a craft that could take people into space, give them a tour, come back down in one piece, then take more people up for a ride.

Samra’s hopes were re-invigorated and he applied. However, due to an age limit of 30 on the Egyptian section of the competition, he applied through the UAE intake instead.

Samra recounts, “I discovered there were over 2 million applicants for the competition worldwide, and I wasn’t sure how realistic my chances of winning were. At the time, there was a bit of a joke, I remember. A political group created a profile for Morsi, and Bassem Youssef created one as well.”

After several months of gathering votes, Samra emerged as one of 100 finalists, which included five Arabs. He began the second stage of the competition, which took place in Florida in late 2014.

The finalists were put through a number of rigorous tests to determine their aptitude. They were tested on their physical fitness through a strenuous military fitness competition. They were also asked to complete various tasks while on board a plane that went into a nosediver for about 30 seconds to simulate zero-gravity conditions.

The would-be space travelers were then required to co-pilot small aircraft as they performed acrobatic manouvers involving increased gravitational pull. Meanwhile, their knowledge of physics and aptitude for teamwork were tested through various tests and exercises.

At the end of the competition, 23 winners were chosen by experts in the field. Fortunately for Samra, he was among their ranks.

However, while Samra’s selection had all gone well, the same could not be said for Lynx II. After a series of postponements due to technical errors and increased security regulations, the spacecraft missed its planned launch date in 2015, and there is still no definite date for take-off.

The delays leave the competition winners earthbound, with a ticket to space and no spaceship to ride in, at least until XCOR gets itself organized.

“Nothing is for sure,” said Samra, “but my guess is 2018. XCOR are making very good progress on developing the aircraft. I visited the site last year.”

Omar Samra standing alongside his plane and instructor for acrobatic flight training.

After receiving his ticket from XCOR, Samra thought to strengthen his candidacy as a soon-to-be astronaut, and made plans to change what he saw to be fatal flaws with Egypt’s relationship with space travel.

Samra says, “People still look at space travel as this impossible thing that they shouldn’t try and do because it’s so far removed from their lives. I often have people telling me that we should try and fix our problems on Earth first before we think about going to space. What people don’t realize is that space travel has very practical applications in their day to day lives. Science, technology, satellites, are all things that have and continue to impact people’s lives on a very practical level.”

Being that he does not come from a science background, Samra sought to educate himself in the field and gain experience that would strengthen his chances of going to space. Along with two other Egyptians, Ahmed Farid and Abd al-Raouf al-Waqad, Samra completed the POSSUM program, a one-week intensive course based in the US and funded by NASA, geared more towards research than exploration.

Those chosen from the POSSUM program to conduct research in space will be going on board the Lynx II, but he participated to gain experience and solidify his candidacy.

Unlikes some of his competitors, Samra doesn’t have a strong background in science or space operations. However, he does have a skill-set that is invaluable to space exploration, which is the ability to deal with harsh conditions and complete a mission despite the difficulties. After climbing the seven highest peaks on the world’s continents and skiing to both poles, he has proven himself in that regard.

“How they assemble the team for space travel is they’ll have a physicist, a pilot, a research specialist, someone like me; people from different disciplines who in a given situation can work together and employ their skills to carry out the job they need to do,” explains Samra.

One of Samra’s biggest aims when it comes to space operations is public outreach and increasing the public’s access to space travel. He sees it as increasing public interest in space travel and their investment in making it a reality. Public interest will increase funding for space projects, says Samra, and with more funding the benefits will be limitless.

“People first went to space in the 1960s. Since then, around 500 more people have gone, which is an insignificant number compared to what it could be if the public was more invested. Science is always removed, it’s in a language the public can’t understand.

“The reason I think my role is important is that I don’t come from a science background, so I can bridge the gap between science and the public and truly show  how important a field it is.”

For the upcoming academic year, Samra is planning a tour of 100 schools (a number he is trying to bring up to 200) and give talks to raise interest in space travel and research, with the aim of encouraging students to believe that such things are possible.

Samra’s plan is to hold a competition in Egypt, where participants will be asked to come up with a science experiment that can be conducted in space. A panel of judges made of experts and renowned scientists will choose the winning experiment, which will then be reviewed (and modified if need be) and then taken to space by the first Egyptian astronaut in space — whether it is Samra or another candidate.

“If an Egyptian 12-year-old comes up with an idea and then that idea is taken into space and is implemented, you start to break all these ideas that people have about space travel. Maybe they’ll start to think that it’s not such an impossibility. And that child can be from Monofeya or Aswan.”

Samra also has in the works a plan to open a space camp for children in Egypt to educate them on space travel. Through practical demonstrations, he says, the children will learn some of the key concepts that surround space operations as a whole.

With regards to his personal journey as an astronaut, Samra reveals that he is close to being a part of a quite different space travel program, the details of which can’t be released at present.

However, he says it will take place over a two-year period, and that he may have to learn Russian. If it goes ahead, he will spend between two and four weeks at the Mars Desert Research Center in Utah, USA.

According to Samra, this program is a huge opportunity, and should he succeed in participating, he will be working with some very big names in the space travel field.

Most importantly, of course, he might finally make it into space. 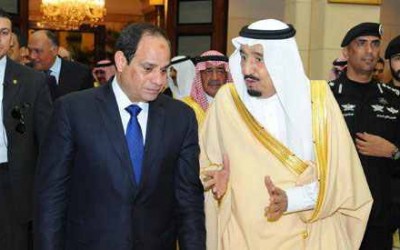 Dr Basheer M. Nafi The crisis in Egypt is growing in complexity and severity by the day. In the meantime, major Arab states, foremost among them Saudi Arabia, behave as if they have decided to ignore Egypt and its exacerbated … END_OF_DOCUMENT_TOKEN_TO_BE_REPLACED

By Jake Ellwood on July 13th, 2015 Since announcing 2 blog posts ago that Ana and I intend to relocate to Dahab, Egypt. We have had many people ask us if “that is such a good idea” Most of this … END_OF_DOCUMENT_TOKEN_TO_BE_REPLACED

BY ANTHONY CHIBARIRWE Egypt is undergoing a serious security and political crisis that is fast approaching a violent climax. That crisis began with the Arab Spring and the resignation of longtime President Hosni Mubarak in 2011; Egypt’s first free presidential … END_OF_DOCUMENT_TOKEN_TO_BE_REPLACED By Dr Cesar Chelala In recent times, women are increasingly becoming an engine for economic and cultural progress worldwide, oftentimes fighting against disadvantageous circumstances. Such is the case of the owner of a small art gallery in the city of Troy, New … END_OF_DOCUMENT_TOKEN_TO_BE_REPLACED 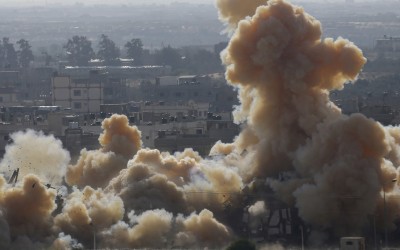 On June 29, Egypt’s top prosecutor was killed in a car bombing as he left his home in Cairo. He was the most senior official to be assassinated since Islamic militants launched an insurgency two years ago after the Egyptian … END_OF_DOCUMENT_TOKEN_TO_BE_REPLACED 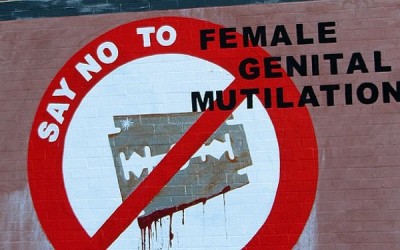 By Dr César Chelala Female circumcision, also called female genital mutilation (FGM) is widely practiced in 29 countries in Africa and the Middle East. More than 125 million women have been subjected to different forms of genital mutilation across Africa … END_OF_DOCUMENT_TOKEN_TO_BE_REPLACED 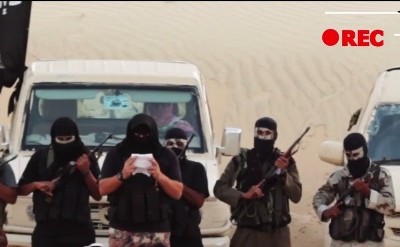 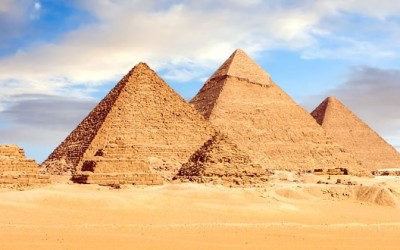 This year’s iteration of HSBC’s annual ranking of the best places to live as an expat, published Wednesday, ranked 34 countries on a host of indicators, such as salaries earned, the expat’s quality of life and an expat family’s ability … END_OF_DOCUMENT_TOKEN_TO_BE_REPLACED